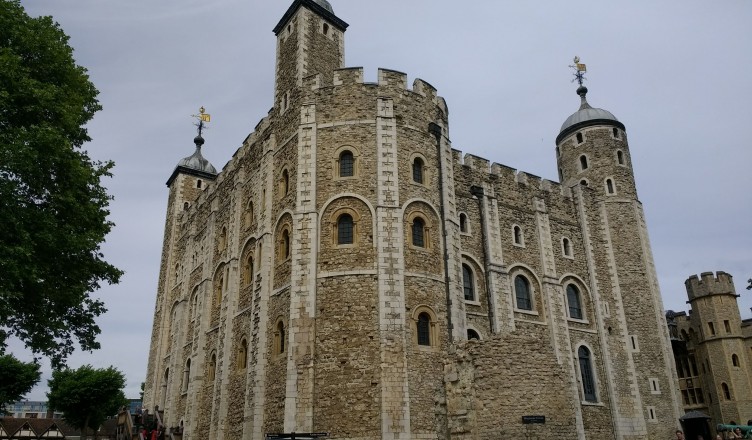 The Tower of London is one of the most visited attraction in London and every year it attracts 3 million visitors. It surely can get crowded!

The Tower of London is a very popular destination for Londoners and tourists alike, so it can get very very busy. The summer months and the school holidays are the times of the year when it gets incredibly crowded, so you’d better avoid them, if you want to have a pleasant day out. If you can make your visit during the week, that would save you the hordes of the weekend, but again try to avoid half terms or other school breaks. Even if you manage to choose the best day of the calendar to visit the Tower of London, don’t forget my second tip… The Tower of London opens at 9am from Monday to Saturday and at 10am on Sundays. However, it is not uncommon to see people queuing outside even before the opening time. The last time I went to the Tower of London it was a Sunday, and I got there at about 9:45: a long queue was already patiently waiting outside. Probably I did not follow my own advise to choose the day well, but sometimes you can visit the Tower only when time permits. In any case, after the opening, I was in in less than 10 minutes, so the total wait was under half an hour. That was the only queue that I had to endure for the whole day! So trust me: arrive early!

This might sound like a weird suggestion, especially for those who don’t live in London. A membership costs a whopping £53 – £82 if you choose a joint membership. However, the entry ticket costs £30, so two visits will amply cover the entry costs. Plus, a membership allows you to visit other royal palaces for free, like the beautiful Kensington Palace and the magnificent Hampton Court Palace. You also have a free entry to other interesting places in London, like the Banqueting House on Whitehall and reduced tickets for Kew Gardens (and a free entry to Kew Palace). If you live in London, or if you happen to come to London fairly often, a membership is surely advisable.

For tourists a membership might not seem the most economical solution, but if you have 2 of these palaces in your list of things to do in London, the cost will be amply covered . Those tourists who really want to see more attractions during their stay, could consider a London Pass instead. I will talk a bit more about this in a separate post.

If you have followed my first 2 tips, probably you have spent a minimum time queuing before entering the Tower, but you’ll risk to ruin your day if you don’t go and see the Crown Jewels before anything else. If you don’t want to take my word for it, look at the images below: this is the empty entrance to the Crown House even on a busy Sunday in June And this is what it looked like only 30 minutes later: the queue is building up And an hour later this is what you get: Visit the White Tower next The White Tower is the oldest part of the Tower of London. This is where William the Conqueror started the construction of its castle and this is where the two princes where found (more about this later). The White Tower is also considered one of the first tourist attraction of the history, since it has been displaying armours since the 17th century. Inside the White Tower there is also an interesting short film showing the history of the Tower of London, and there’s an area for kids to play (although I don’t think the Tower of London is the ideal place to visit with young children: too many queues and not much space to play, and a lot of steps. I have written a specific post on what to do in London with your children). They simply know every story and legend, every ghost and gruesome anecdote about the Tower, and following one of their tours will give you a more complete experience. The Bloody Tower owes is name to the unfortunate experience of those who were kept prisoner there. However, the imprisonment in the Tower was not always as bad as it is sounds. Inside the Bloody Tower, for instance, you’ll see the living quarters of Sir Walter Raleigh, who was imprisoned here, but lived in relative comfort with his family, was allowed to attend a garden and to follow his botanical interests. Clearly, he was not a free man, so he had is moment of depression, but still was able to conduct a decent life.

The story of the two princes is one of the saddest of the Tower: the young Edward V and his younger brother Richard were transferred to the Tower of London in 1483, before Edward’s coronation. While they were kept here – allegedly for security reasons – the were declared illegitimate, thus losing their right to the throne. Initially they were left free to play around the castle and its grounds – after all they were just two 9 and 12 year old kids – but later they were seen less and less until they disappeared. Apparently, they were murdered by their own uncle, the future King Richard III, and their bodies hidden.

As we all (probably) know, King Richard III did not have a long and peaceful reign, and soon after having removed the young princes from his path to the throne, he was defeated in the battle of Bosworth – the last King of England to die on a battlefield (how many things you learn from a Yeoman…)

In 1674, during the some work in the White Tower, a box was found under a staircase, containing some human bones. An analysis revealed that they were two young children. Many think that these were the remains of the two unfortunate princes, whose ghosts are still spotted in the grounds… Ask a Yeoman for confirmation!

Make a tour of the ramparts A walk on the ramparts of the Tower of London will offer amazing views on the Thames, the Tower Bridge and the City of London. Along the rampart you can also see the reconstruction of the medieval palace and you’ll be able to learn more interesting stories about the Tower and its inhabitants. Images speak more than words…

Arrive at the Tower of London by boat The Tower of London can be easily reached by tube (district and circle line, Tower Hill stop) or by bus (I suggest the n.15 from Trafalgar Square), but the best way to approach it is surely by boat, using one of the Thames Clippers services. The best trip would be from Vauxhall or Millbank piers, so you’ll have the chance to pass in front of the House of Parliament and enjoy wonderful views of the City. Take a walk on the Tower Bridge

Your day at the Tower of London won’t be complete if you don’t take a walk on the amazing Tower Bridge, one of the most beautiful bridges in the world. From the bridge you can enjoy a wonderful view of the Tower and the skyscrapers of the City, on one side. On the other side of the bridge you can also see a different part of London, with its warehouses, now transformed in luxury apartments. You won’t fail to notice the contrast between the busy city and the wider river stretch, and for a minute you can imagine how this was one of the busiest harbour in the world. If you have visited the Tower of London and would like to leave your own suggestions for a perfect day out, you can use the space for your comments below.