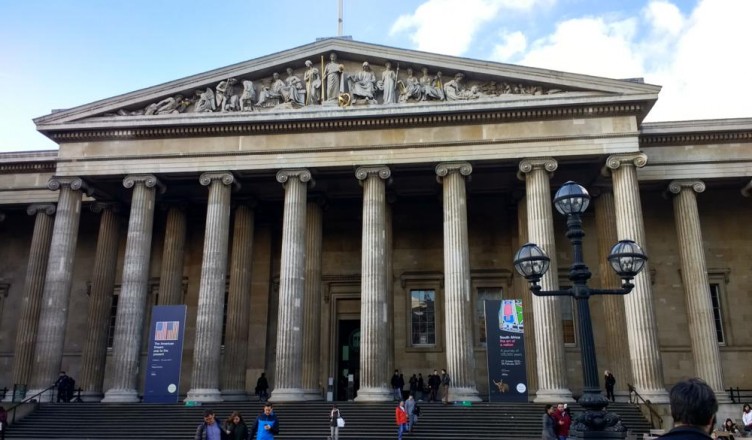 For those who don’t have much time to spare, I chose seven things to see at the British Museum. In less than two hours you will have the opportunity to discover the most precious treasures of the British Museum and see unique masterpieces of ancient times. Although the British Museum deserves to be visited with calm, not everyone has the chance to enjoy it a bit at a time. Those who live here in London have the great advantage of visiting the British Museum whenever they want and choose the best time for a visit, like on Friday nights, when it stays open late.

Admission to the Museum is free. Exhibitions and special events usually are not and there’s an entry fee to pay for them (unless you are a member). To enter the Museum you must now pass through security checks. If you see a long queue at the entrance, however, do not be discouraged: usually it proceeds fairly quickly.

To speed things up, bring with you as little as possible: a handbag or a small backpack are easier to control. Avoid bringing bulky bags with you: you will help yourself and whoever follows you!

Once inside the Museum your gaze will be naturally attracted towards the glass ceiling. On sunny days the light illuminates the circular atrium, and the white interiors will look impressive. Some of you may not like the contrast of modernity with the classical elegance of the structure. Personally, as a building I prefer the National Gallery and the Natural History Museum. However, the  modernity of the interiors have been probably chosen to highlight the historical artefacts on display. (If you love to admire artistic masterpieces in a unique and attractive environment, be sure to add to your list the John Soane’s Museum, which I’ll describe soon in an a new post).

If we follow the circular atrium clockwise, to our left – in front of the gift shop-we find the entrance to the room 4. As soon as we enter we will find ourselves immediately before (crowd permitting) the first of our seven things to see: the Rosetta Stone. The stone can always leave me a little amazed, when I find myself in front of it, probably because it is so famous and it was mentioned so many times. As we approach a little closer to the protective glass you can clearly see the three languages carved into the rock. Probably the Rosetta Stone is one of the most important archaeological finds, without which in all likelihood many ancient languages like Egyptian hieroglyphs would remain a mystery forever. Imagine the thrill of archaeologists when they found it. It was like finding a gigantic vocabulary. The solution to years and years of studies laid there before them. Today, to see all these people taking a selfie in front of the Rosetta Stone can surely take away a bit of the magic of the moment, but if you get there at the right time,  when the room is quiet and maybe a little darker, you might feel a little chill down your spine…

2 – the Statue of Ramesses II

In the same room of  the Rosetta Stone we can admire several treasures of the ancient Greek, Egyptian and Assyrian-Babylonian world. You might wander endlessly around these wonders of lost civilisations, but if your time is limited, go to your right after the Rosetta Stone, and you will be in front of the statue of Ramesses II. Definitely one of the most famous Egyptian pharaohs, Ramesses II made the happiness of many archaeologists, given the amount of monuments and statues that were built during his reign. This bust, perfectly preserved, is a splendid example of the quality of Egyptian sculpture.

On the opposite side of the statue of Ramesses II, on the left of the beautiful statue of Venus, you can enter a world probably less known than the Egyptian, but just as impressive: the Assyrian Babylonian. Passing between the giant statues we enter a gallery (room 10a) on whose walls you can admire the bas-reliefs depicting the lion hunt, the sport preferred by ancient Assyrian Kings. Usually this area of the British Museum gives some breathing room to the visitor, perhaps because the Rosetta Stone – not very far – acts as a magnet for many visitors and the Egyptian statues attract people towards the opposite side, leaving this area slightly empty in comparison. In my opinion this is one of the reasons why the lion hunt reliefs are so beautiful to see, because you can enjoy them in peace, looking carefully at the details. These sculptures were made around the year 640 BC, at the time of the Assyrian king Ashurbanipal, and were intended for his famous Palace of Nineveh.

Probably in London there are more treasures of the ancient world that in all national museums worldwide. Therefore, how could we visit the British Museum and miss the Parthenon rooms? The reliefs that adorned the outside of the famous Greek temple have been meticulously reconstructed. These sculptures have been on permanent public display since 1817, and they are some of the greatest examples of sculpture of all time. They must be absolutely on your list of things to see at the British Museum! The ability of the ancient Greek sculptors can be admired in the beautiful Parthenon figures and statues.

To welcome the visitors in the field dedicated to Asia and Oceania – on the ground floor, on the opposite side of the entrance to the Museum – there’s a big black statue called Hoa hakananai’a.

Ironically the statue’s name means “the stolen friend”. The statue was originally on the island of Rapa Nui, also known as Easter Island. Although it is quite difficult to date these sculptures, this was probably made around the year 1200.

Originally these statues were coloured and often coral was inserted in the eye cavities.

The statue was brought to England in 1868 and was donated to Queen Victoria, who then proposed to give it to the British Museum.

7-the Clocks and Watches Gallery If you have finished visiting the rooms dedicated to Egyptian cult of the afterlife, before returning to the ground floor, I suggest you to visit the rooms 38 and 39. You will find an incredible collection of clocks and watches of all kinds. Watch and clock enthusiasts – or simply those that love mechanical engineering –  will be enthralled to admire the complicated movements of these mechanical wonders. Many of the objects on display are actually working and hearing the ticking makes the atmosphere simply… magic!

A visit to the British Museum surely deserves a bit more time, but if you don’t have more than a couple of hours free, these are in my opinion the 7 things not to be missed! If you have any other ideas or suggestions, feel free to leave them in the comments space below. It would be great to see what is your list of things to see at the British Museum.