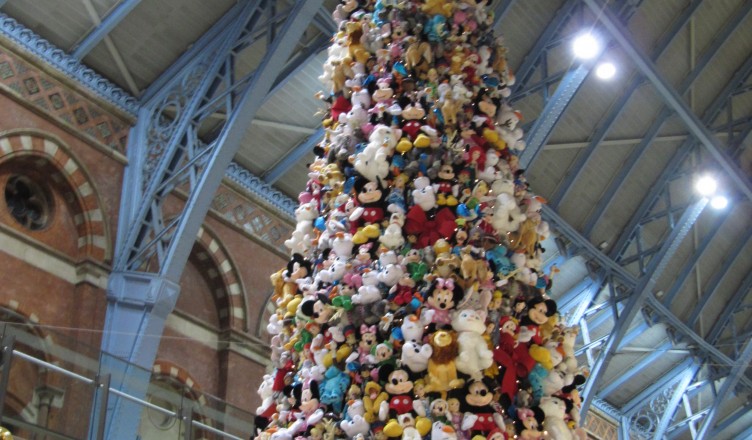 A Christmas tree made of Disney soft toys. Can you recognize all characters? If you happen to pass by St. Pancras station in these days, you can admire inside a most unusual Christmas tree. Placed near the Eurostar departure hall, this tree is entirely made of soft toys representing the most popular Disney characters. It is obviously sponsored by the Disney Store, but for once, we can forget its commercial link and just focus on its beauty. Because, we must confess, every time we see some Disney character we cannot fail to have nice memories.

But is our knowledge of Disney enough to be able to recognise every character on the Disney Christmas tree? There are classic characters like Mickey Mouse, Minnie Mouse and Donald Duck, of course, and the winter season cannot forget a recent addition such as Olaf, the snow man of Frozen. Also Sven the Deer is clearly visible, and both Anna and Elsa, although submerged by many other characters. If you have kids of the right age Frozen has probably been last year top attraction for them, and by now you must have seen the film a dozen times and should be able to recognise all the main characters. But there are also characters of older Disney masterpieces. For instance, I could spot one of the Aristocats (Minou), several Dumbos, Peter Pan and Tinker Bell, and Simba (the Lion King). I must admit that I had to look up in the Disney Store to see some unknown toy, but even after this innocent bit of cheating many did not ring any Disney bell, not even after reading their name and description. It might be possible that some of them were not exported worldwide or more likely that I missed some Disney movies between my youth and the arrival of my nieces. What about you: can you recognise them all? Look at the picture above: who is the little one squeezed under the weight and size of Dumbo? And who’s the one on the left with the silly blu hat? The dog on the right must be a Dalmatian, but what the heck is that bird on the bottom left? And the blue monster?

Give me a hand and leave your answers in the comments.