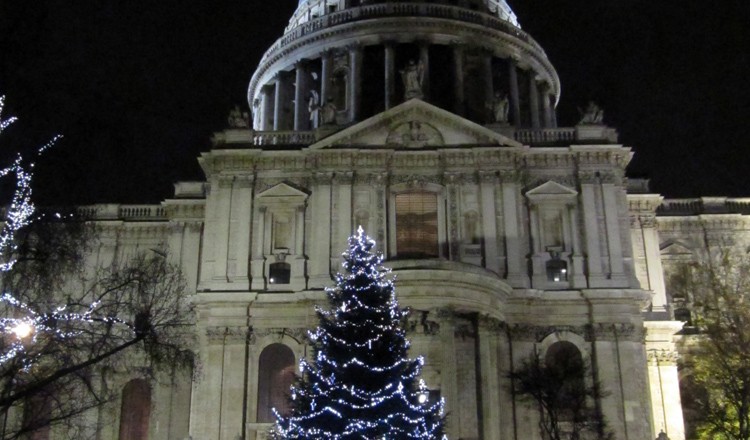 Is the climate change to blame? Let’s find out what the newspapers say: we will be surprised

If you wanted to see some snow in December, you will be disappointed. On the contrary, those who can appreciate the advantages of a mild weather will say that, after all, we are still in autumn, and there is nothing to worry about. The festive atmosphere and the Christmas lights make us think of cold decmber days, but technically winter starts only on the 21st of december. But how many of you remember cold and snowy December days?

With today’s weather it’s really hard to dream of a White Christmas. London has reached 15°C on the 16th of December: extremely nice for a walk (and you can always follow my advice and choose an autumn walk in Battersea Park, although with less colours than one month ago, or follow the Southbank walk to the Tower Bridge, combining a nice walk with a visit to the Christmas Markets), but probably a strong indication of the climate change and the Global Warming.

This is a very warm debate (no pun intended), but hard to understand in its complexity. Generally speaking, we all know that our planet is gradually warming up, and this will ultimately lead to massive changes. But will they be really catastrophic? For the time being we can see the benefit of a lower gas bill, with no heating in our houses until the end of november, but sooner or later we will pay for this. Or not?

Strong rain, storms and floods, for instance, are becoming more frequent, and the scientists have often interpreted these signs as effects of the global warming and the recent floods in Cumbria seem to prove it.

But why is there so much uncertainty about the effects of the climate change? Newspapers are not helping us much either, giving us many controversial titles and unclear answers. Let’s try and have some fun reading these titles. At least we will understand why there is so much confusion…

Never mind global warming, summers will get cooler and drier

This article warns about the effects of global warming, but says that we will experience cooler and drier summers. Why? Last summer seemed pretty warm to me, but maybe it is because I have very low expectations on British summers in general…

SHOCK CLAIM: World is on brink of 50 year ICE AGE and BRITAIN will bear the brunt

Scary title indeed! I am almost tempted to pack up and look for a new place to stay. Who can really understand the connection between global warming and Ice Age? The article, just to push it a bit further, recites”BRITAIN faces DECADES of savage winters driven by freak changes in global ocean conditions and a weakening of the sun“. I can hardly understand the ocean conditions, let alone the weakening of the sun. However, now we have 15°C and no Ice at the horizon. I give up (and delay my packing).

This article is already one year old and probably 2015 will be recorded as warmer than the record breaking 2014. Surprisingly, the article says that 2014 was the warmest year since Oliver Cromwell – or better 1659, for those who are not very much into English history. But, hang on a sec: that means that 1659 was the second warmest year in history? And if it so, what about the global waming theories, the grenhouse effect, the gas emissions? They cannot possibly be applied to 1659! In reality it is only a misleading definition: temperature data were not collected before 1659, therefore 2014 was the warmest year in the 1659-2014 period. Apparenlty 1659 was not very warm at all. No wonder there’s so much confusion around!

Eventually we have some clear descriptions of how the climate change can produce serious consequences and also how difficult it is for scientists to relate causes and effects. I understand that in an era where titles must grab the attention of the reader sensationalism work well (and produces more clicks on the online versions), but do we really need a financial newspaper to understand such an important issue which regards everybody? The FT has also limited access to non-subscribers, so it is also possible that you might not be able to read it entirely. Which is a pity.

Thank God the Spectator is bringing back some non-sense in this discussion, mixing up things and restoring confusion to its due level. According to the newspaper the so called “climate change” cannot be responsible for floods, and to be entirely honest climate change is a bogeyman no one should believe in, unless your a child (or an adult with a child like brain). Obviously, this article is followed by tons of comments, and – not surprisingly so – more than on the FT. I wonder why!

I leave you now to add your comments and express what you feel like having such a mediterranean December in London.