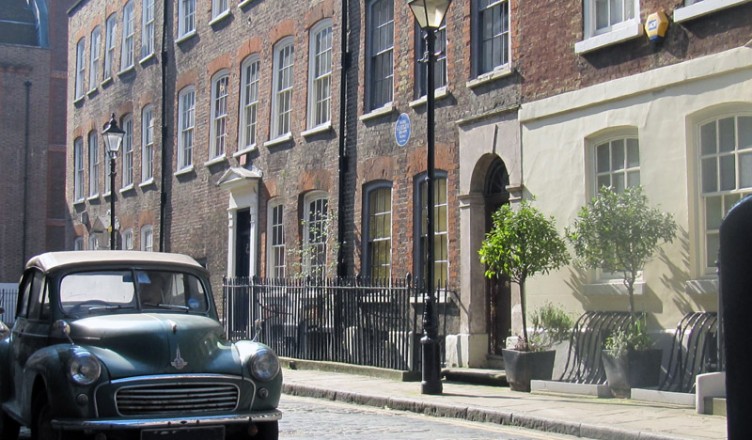 This walk in Spitalfields will take you far from the usual tourist routes to discover little-known places and local markets. My suggestion is to make the walk on Sunday morning, when the bustling markets of Spitalfields, the Sunday Up Market, and the markets of Brick Lane and Petticoat Lane are in full swing. Spitalfields is not particularly well-known to tourists, even if the proximity to Liverpool Street Station- first destination for those arriving in London by train from Stansted Airport – and trendy Shoreditch is making it increasingly popular. Perhaps the area is most remembered for being close to Whitechapel, sadly famous for the murders of Jack the Ripper: in Spitalfields there are many places linked to the murders, but that’s not the main reason for our walk. There are enough guides and walking tours about Jack the Ripper!

We will focus our attention on the historic background of Spitalfields, its architecture and its lively markets. Looking around we can still see many traces of Spitalfields  past, a past made of immigration, very different cultures and traditions. The area is now transformed, and glass modern buildings are now visible from every street, but if you venture down side alleys and narrow streets it is not difficult to imagine what life was like around here two or three centuries ago…

Spitalfields in the 1700s

We begin our tour by visiting one of Spitalfields’s best preserved streets with many original buildings dating back to the 18th century. The starting point of our route is Liverpool Street Station, that can be reached from the town centre either by bus (bus 11 from Trafalgar Square) or by tube (central line). We leave the station behind us and continue north on Bishopsgate. We turn right in Folgate Street, with beautiful examples of houses of the 1700s: in front of the number 18 you will probably see a line of people waiting to enter the Dennis Severs museum. Inside, if you have the patience to wait, you can see the reproduction of a family home through the time and imagine the  life of a French family since their arrival in 1700 until the early 1900s. Continuing along Folgate Street, we turn left on Elder Street, where there are other well-preserved examples of the architecture of the 18th century. This area was heavily populated by French Protestants (Huguenots) fleeing from religious persecution. A first wave arrived after the terrible St. Bartholomew’s Day massacre of 1572, and again in 1685. Spitalfields was an area known for its tolerance – especially religious – and foreigners could easily adapt to the new reality and left undisturbed. In Spitalfields the Huguenots, mostly skilled silk weavers, developed their business, and being outside the city walls, they did not require to be member of a guild in order to practice their activity. If we keep our gaze upward we can still make out the attic rooms used as workshops by the silk weavers who used to live in these streets.

We go back from where we came and we turn left in Spital Square. Here stood the Augustinian Hospital (Hospital – abbreviated Spital) that gives the name to the area. The square was once the most beautiful part of the quarter, where the richest silk merchants had their homes. There are still some examples of original buildings (like the house at number 37), but most of the houses were either demolished or rebuilt.

After the square you enter the vibrant Spitalfields market. The stalls are so many that the choice is neverending, however it is becoming increasingly difficult to find original articles on sale. Often you find the same goods on different stalls even at little distant from each other. Despite this, those who love markets will still enjoy it, and in any case we have to walk through it to continue our walk on the opposite side. When we are outside, we turn left onto Commercial Street and then right on Hanbury Street. Here, in the courtyard of number 29, the body of Annie Chapman – the second victim of Jack the Ripper – was found.

The Sunday Up and Brick Lane markets

We enter the carpark on the left to visit the Sunday Up Market. Here the atmosphere is different from Spitalfields Market, messier, with almost improvised stalls,and you can find a bit of everything: from used clothes, records, jewelry and handmade crafts. There are also many ethnic food stalls, not particularly cheap considering the area, but definitely tasty. If you are feeling hungry the choice is all yours. Getting out of the market we find ourselves in the vibrant and colorful Brick Lane, the heart of the Bengali community. If you want to try a local restaurant to taste some specialties of Bangladesh , Brick Lane is definitely the perfect place to do it.

Don’t miss the opportunity to stop and listen to some of the ever present buskers in Brick Lane. The one I saw was absolutely fantastic! We continue our walk in Spitalfields going left towards the building of the Truman brewery, which dominates the road since 1666. Today the factory has been transformed into a multifunctional centre, with art studios, plenty of trendy bars and restaurants and modern offices, so typical of the recent transformation of the East End.

Did you know? The Truman Brewery has had an impressive story to say the least. Founded right here on Brick Lane in 1666, when the street was only a dirt road surrounded by open fields, over the centuries it continued growing, until 1873, when – with the purchase of Phillips Brewery of Burton- it  became the largest brewery in the world! But in the twentieth century began the decline of the brewery, which was forced to close down in 1989. In 2010 a group of enthusiasts tried to revive the Truman brand and his black eagle symbol (the brewery was once known as Black Eagle), even if the new factory is no longer  in the historic building on Brick Lane. So, if  you want to taste a Truman Pale Ale or the classic Porter, you can still find it today! Just before the main building, we turn right to see the third market of the day, the Backyard Market. For something unusual, I recommend you to enter the Tea Rooms Market: do not be impressed by the very low ceiling and narrow passage: if you can squeeze through the Sunday crowds, you will find yourself in a world of antiques and unusual second hand clothing, old records and bric-a-brac. I think this is the most interesting market of the day, and you will be sure to find something special there. I could have spent more time here, but I did not want to miss the last market of our trip, Petticoat Lane market.

Return on Brick Lane and go back to where you came from until you meet Fournier Street, at the end of which we find the Christ Church Spitalfields on the left(dating from the early 1700s) and The Ten Bells Pub, on the right-hand side of the street.

Did you know? The Ten Bells Pub, which dates back to 1755, has a link with the story of Jack the Ripper, as it used to be a well known meeting place for prostitutes of Whitechapel. Did the Ripper hang around here too, waiting for his next victim? We don’t know that for sure, but it has bee recorded that Annie Chapman was seen drinking at the pub the night of his murder and Mary Jane Kelly – the fifth and probably last known victim of the Ripper – was a frequent customer of the pub, as this was where she used to pick her “clients.”

We continue straight on Brushfield Street leaving the building of Spitalfields Market on our right. From the outside you can see well the market structure, which dates back to Victorian times. On the left side of Brushfield Street there are still many examples of shops and buildings dating back to the 1700’s, such as A. Gold (the old original sign is still hanging outside the shop). Later we turn left in Steward Street and then right into Artillery Lane, good examples of  what the streets of London looked like  in 1700’s and 1800’s. We turn left into the narrow Sandy’s Row. Further down this road we see another example of an old London street: just take a look at the Artillery Passage on the left. We continue straight on Sandy’s Row, at the end of which we meet Middlesex Street, better known under its previous name of Petticoat Lane. In this place there has been a market for centuries . In the 1800’s the sellers were mainly poor Jewish merchants, and it is here that Charles Dickens often found inspiration for some of his characters.

Did you know? Fagin  – one of the characters in Charles Dicken’s novel Oliver Twist – was probably inspired by a real fence who lived in a street near Middlesex Street.

Petticoat Lane is definitely not a tourist market, but rather a true neighborhood market, where it is easy to find bargains and products sold at discounted prices. Nothing ethnic or particularly fashionable, but some cheap souvenirs can be certainly found. I bought some small gift ideas for £1: so, next time I go to Italy I will have all the souvenirs for my Italian friends already sorted!

Continuing along Middlesex Street, at the end of the road we find ourselves on Bishopsgate again. Our circular walk around the streets of Spitalfields and its markets ends here.

If you liked the walk or have any further suggestion, you can leave your comments in the space below. And if any of you want to explore an unusual area of ​​London, do not forget to take a walk in Spitalfields on a Sunday!